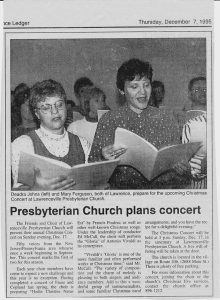 The PCOL website now hosts several recorded concert programs performed by the PCOL Choir and friends from the community, going back nearly 50 years. On some there are voices from the past, including Rev. Dr. H. Dana Fearon, who provided greetings on some, and narrated a performance of a Randall Thompson piece, “The Nativity According to St. Luke.”

These programs have been digitized and restored from cassette recordings that date to the late 1970s. The cassettes are from my personal collection and the sound quality as digitized was in some cases less than satisfactory due to the age of the cassettes. This required considerable editing and cleaning up before they could be shared. The digital conversion took place using a device that could read the cassettes and then load them into my computer. Next, they were opened in a software application that could read the files and allow them to be edited. This process was quite time-consuming and were it not for the Pandemic the recordings might still be awaiting review. I have also employed the services of John Baker, a sound recording professional from Princeton, to assist in cleaning up some of the more damaged files. 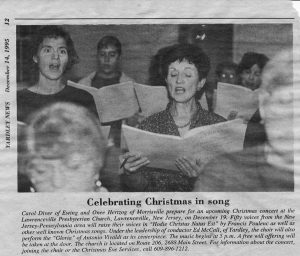 The origin of the cassettes was from live recordings made over the years by Wayne Edwards, husband of Gail Edwards, our long-serving organist and choir director, when most of the concerts occurred. He had very sophisticated equipment for the time, including reel to reel tape recorders, and a device called a “DAT” recorder, which stands for Digital Audio Tape. This was one of the earliest digital formats that helped begin the analog to digital revolution, resulting in CDs, MPEGs, and so on.

Most of the concerts are “Christmas Vespers,” which occurred each December on a Sunday afternoon just before Christmas. They were not true “Vespers” services in the liturgical sense, but they were very ambitious programs which required a lot of rehearsal time and a more robust choir than the usual Sunday complement. Normally the Sunday choir consisted of from sixteen to twenty church members, but for the special programs it could be more than double that size. All singers were volunteers, and many were friends of the regular choir. Some concerts required significant orchestral accompaniment as well. Many of them use the old “tracker” organ, which dates back many years in the church’s history. The earliest program is dated December 10, 1978, and the newest so far is from 1993. There is also a recording of the Organ Dedicatory Concert from November 17, 1991.

Available along with the sound recordings are copies of the printed programs to enable the listener to follow along, and to see who the choir members and soloists for the concert were. Thanks to Jane Ensminger, retired choir librarian and alto singer, for preserving these programs…without them the restoration work would have been much more difficult.

After the initial uploading of the services, there will be additional ones added, including some of the Spring Concerts. It is hoped they will be available before the end of the year.

In addition to those people mentioned above, I would like to thank Jeff Vamos and Jim Moyer for their interest and assistance in getting this work available for the congregation, both new and old, and to our communications coordinator, Aaron Sizer, for putting it all together. Working with these tapes has been a rewarding experience for me, as well as one of both happiness and sadness hearing old friends who are no longer with us singing again.