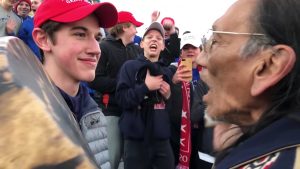 According to Matthew, when Jesus sends the disciples out into the world to preach the gospel – they go out two-by-two if you recall, from town to town – he instructs them to be “wise as serpents and gentle as doves.” (Matthew 10:16) His exhortation is an acknowledgement that the world has an agenda, and it’s not going to be friendly to what you’re doing. People will twist your words, most will be hostile to your message. Be smart, but be loving. And even if they hate you, love will overcome the world. Eventually.

This is such good advice for thinking Christians today – including me – especially when we take a good look at this cultural moment with respect to our consumption of information. It seems axiomatic that a byproduct of our divisive political life is a general distrust of media. I should say, distrust of certain forms of media, depending on your perspective. If you listen to Fox news, you distrust the “fake news” New York Times. If you listen to NPR, you cast a skeptical eye on The Wall Street Journal. Today, information is a boutique item, and there’s an outlet to suit every taste. All this made more complicated by a Twitter-fed social media environment that makes information available instantly. A narrative in every pot, believe what you wish. And what gets lost? The truth.

One example of this that should humble us all is the recent controversy over an incident that unfolded on the National Mall this past Friday. Many of us saw a snippet of video, and witnessed a Native American man being heckled by a group of teenagers from a Roman Catholic high school in Kentucky. The smug image of a young man, smirking at the Elder as he sang his chant, inspired many to the desire to do harm. We were sickened and outraged. I vented my own animus in the sermon I preached last Sunday, citing this as an example of what’s ill within our body politic, of the fact that racism is still alive and well and living in America. (Which I truly believe, by the way).

I stand by that sentiment, but as I consider it today, I believe such racism is far more subtle than we might ever first think. This incident serves, I think, as a Rorschach test of our national psyche. Because, as we heard more about the context of the event, it became clear that there was more to the story. And to really find out, you need to dig deep, and read a variety of accounts about it. It’s pretty incontrovertible that those MAGA-hat wearing kids were taunting that Native American man (you can’t edit-out those boys doing the tomahawk chop, for example). But they apparently did not chant, “Build the Wall,” and there were many additional complexities to the situation that serve to explain to some extent the young men’s behavior.

But – the irony here has to do with the fact that you can really believe whatever you wish about the story, especially when presented with the small window through which the story was initially viewed. But that’s true even after doing a good bit of after-the-fact digging (which I did). Racist right-winger kids in MAGA-hats who for whatever reason belittle an innocent Native American man. Innocent teenagers reacting to the jeers of Racist Black Israelite hecklers.

The writer Don Miguel Ruiz wrote, reflecting a core article of Reformed faith, “We only see what we want to see; we only hear what we want to hear. Our belief system is just like a mirror that only shows us what we believe.”

If you want a very interesting perspective on this, Trevor Noah says it way better than I can. I know, I know, information from the left, but just take a look; David Brooks’s perspective is also wise, I think.

All this is no surprise to my Calvinist sensibilities. As children of the Reformation, we ought to know that our capacity to see clearly what is true is deeply flawed. We know for a fact that racism exists, just as human sin exists. But it is also true that it’s more difficult to see and understand than in the days of Dr. King, when Bull Connor’s German Shepherds made the evil all so clear. Now, the evil of racism is shrouded in a fog of information, in the complex idolatries that make racism, and human sin, so insidious.

Does the behavior of those boys indicate something sick about our nation? I still believe it does, but I recognize my bias here. Does it justify death threats against those teens, violence against the smirking boy? Most definitely not. Is it way more complex than we can imagine, even if we were to see it with our own eyes? Oh yeah. Does that mean we become unable to act? To quote Paul: by no means!

Perhaps the best thing to keep in mind is the second part of Jesus’ advice in Matthew 10. Be wise as serpents (here meaning: beware of what brand of truth you consume!), but by all means, be gentle as doves. Use as your primary frame of reference the love and justice of the Gospel of Jesus Christ, who ate with sinners, and challenged the dominant narrative of Rome and the religious establishment, whose truth emanated not from self-justification, but loving self-donation. Do that, and the truth’s hard to miss.

But – most important – what do you think? Leave comments below, or via our FaceBook page.