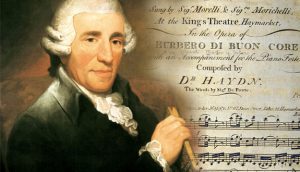 Music is such an important part of our worship, since it enables us to praise God not just with our mind, with our words, but with the soul. On Sunday, May 13th, we’ll be celebrating music as a means to glorify God as our Choir and Concertsingers offer Haydn’s Mass in B flat. The six movements will be used as part of our liturgy (the movements within worship).

For those who wish to read about this most celebrated piece of music, here is a description offered by our Director of Music, James Moyer:

Haydn’s Missa Brevis Sancti Joannis de Deo was composed around the mid-1770s, and was the last of his missa brevis compositions. It was given the name Kleine Orgelsolomesse because of the organ solo in the Benedictus movement, and possibly also to distinguish it from the longer Missa in Honorem Beatissimae Virginis Mariae, known as the Grosse Orgelsolomesse, which was written around 1770.

The work is dedicated to Saint John of God (1495-1550), the founder and patron saint of the Hospitaller Order of the Brothers of Saint John of God, known usually as The Brothers Hospitallers, a religious order devoted to providing medical services to the poor. Haydn’s employers, the Esterhazy family, were great supporters of the Order, and the Mass was written for performance in the chapel of the Brothers in Eisenstadt, with Haydn himself playing the organ. The scoring reflects the small ensemble that would have been used with soprano solo, chorus, organ and strings.

The missa brevis format was especially popular in mid-18th century Austria, and Haydn deliberately uses abbreviated music forms and what was called ‘polytextur’, the overlaying of different texts, in order to keep the mass reasonably short.

The brief opening Kyrie is set as a slow adagio, beginning quietly, with alternating louder passages, before finishing with a final triumphal eleison.

The Credo opens with an allegro, each voice again singing different parts of the text, before the music slows to an adagio for the Et incarnatus est. This continues until the allegro restarts with the joyful Et resurrexit, the movement ending with repeated Amens.

The short Sanctus follows, an allegro in 6/8 time, ending with a final declamation of Osanna.

The rhapsodic Benedictus is sung by the soprano soloist, accompanied by the organ solo from which the mass takes its name. This is the longest of the six movements, and forms the centrepiece of the work. Interestingly, Haydn had already used the same format in his earlier Grosse Orgelsolomesse, and it seems that Mozart adopted the idea in his Missa Brevis in C, K 259, composed in 1776, also known as a Kleine Orgelsolomesse.

The chorus returns in the final Agnus Dei, a peaceful adagio in 3/4 time. But rather than change the mood at the Dona nobis pacem, as would normally be expected, Haydn chooses to maintain the same sense of contemplation, and the movement ends quietly with the traditional prayer for peace.